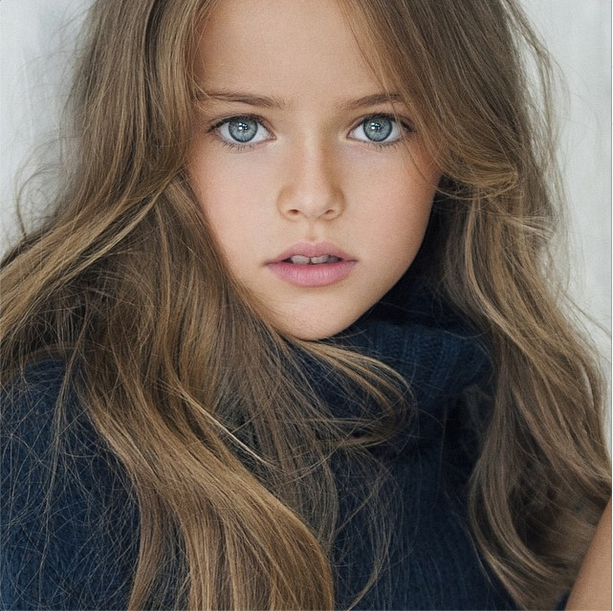 Call it vain, but I have a sincere appreciation for beautiful people. Yes yes, the kind that is inside… but right now, I’m talking about the kind that’s outside!

I had to introduce you to Beauty herself (no, that’s not her name). Meet Kristina Pimenova – the “Most Beautiful Girl in the World”. At least, that’s what magazines have been dubbing her.

Pimenova is a 9 year old supermodel from Russia. She’s been modeling since age 3 and has appeared in campaigns for huge names such as Roberto Cavalli, Benetton, Dolce & Gabbana and Armani. The modeling sensation has over 398,000 followers on Instagram and over 2 million Facebook likes. Her online presence on social media is managed by her mother, Glikeriya Pimenova.

So why am I posting about Kristina?

This adorable little girl has been getting plenty of attention – positive and negative. Of course, that’s to be expected but the negative comments are kind of…pervy.

Under multiple photos, grown men can be found commenting “hot”, “sexy legs”, “marry me”, “I think I’m in love” and other disturbing sexual overtones that I won’t be posting here. It’s disgusting.

Other comments made by men have “themes of enchantment” such as “what sorcery is this?” Yes, it sounds like a joke. But an article by Yahoo points out that these particular comments are a bit “too reminiscent” of terms utilized in the “Lolita” by Vladimir Nabokov – a novel about a horrifying sexual relationship with a young girl and how the grown man can’t help Lolita’s “magical charms”.

And then, I see comments from women claiming they are “jealous” and I’m just like, “okay…she’s the child but seems like you’ve got some growing up to do.”

Kristina’s mother has been accused of sexualizing her child by posting “provocative” and “adult poses”. Mind you, the little girl is just wearing a pair of shorts! (She was outside on a sunny day, by the way.) And in the other photo, she’s crossing her legs on her bed in a pair of shorts…again. Glikeriya Pimenova claims that the shots of her daughter in shorts were fine until our “Western media” pointed it out and looked down on it. She argues that her posts of her child are innocent and of course, refuses to condone these accusations about the “sexualization” of her child.

The media’s blatant disapproval of Kristina’s “model off duty” looks are plain ridiculous. As a child, I never wore short shorts because my mother didn’t approve. She’s gotten more lenient now, I used to wish I could wear them when I was younger. But my godsister wears the same booty shorts and at Kristina’s age, at that. Yes, she has long legs, too… but, regardless of size proportion, I see plenty of young girls doing the same thing! Why is it such a problem with Kristina? Why is it like more men are preying on the young girl?

Honestly, it’s because we provide a platform for sick-minded people to do so. Everyone has a voice anywhere, everywhere.

It’s not a new thing – for a child model to walk the runway and appear in ads. There are laws created to shield child models from the brutal aspects of the fashion industry, but there should be some to protect children like Kristina from the public! (Improbable? Yes.)

The public is making her popular (unfortunately, these grown men play a role). The media is literally adoring her. And fans are marveling at the young beauty, pointing out that she was born just two days after Christmas, implying that Kristina is an angel.

An article “Cute or Creepy?” argues that indeed Kristina is undeniably cute, but her photos are creepy. The news personalities feel “sorry” for her and think her mother should allow her to behave as a child. Others deem it sad that the mother has “molded” her daughter to be a “wax-like” figure for the public to idolize.

Personally, I wish Kristina wasn’t dubbed “the most beautiful girl in the world” for the sake of little girls and their self esteem but that should be the only issue here. Kristina’s self worth as well as other girls her age. Grown men should not be a factor – commenting under her photos (I’m seriously praying for them) and her mother shouldn’t be accused because she proudly shares her daughter’s looks and life with the world.

But what do you think, Adorners? I’m sure we all agree that the child is beautiful. But do you agree with the media and think Pimenova is sexualizing her daughter? Or do you side with her mother?

Check out these sources for more.

2. Mother of ‘The World’s Most Beautiful Girl’ Defends ‘Provocative’ Pictures

3. Kristina Pimenova: 9-Year-Old Dubbed ‘Most Beautiful Girl In The World’, Is This Wrong?

4. Kristina Pimenova: Mother Of ‘World’s Most Beautiful Girl’ Says Only Those in Gay Marriage Countries Think Photos Are Sexual